What is Internet of Things (IoT)?

The internet of things (IoT) is a giant network of dedicated physical objects that contain embedded technology to sense, communicate or interact with their internal states or the external environment. IoT devices share the data they collect by connecting to an IoT gateway or other edge device where data is either sent to the cloud to be analysed or analysed locally. The devices may also communicate with other related devices and act on the information they get from one another.

IoT devices do most of the work without human intervention, although people can interact with the devices, eg to set up, give instructions or access the data. This adds a level of digital intelligence to otherwise dumb devices, merging the digital and physical worlds, forming a system of interrelated computing devices, mechanical and digital machines, objects, animals or people that are provided with unique identifiers.

Common examples can be found in consumer products such as people with a heart monitor implant, farm animals with a biochip transponder, self-driving cars with complex sensors to detect objects in their path or simple sensors to detect and alert when tire pressure is low, to fitness wearables that measure your heart rate and the number of steps taken.

Increasingly, organisations in various industries are using IoT to operate more efficiently, better understand customers to deliver enhanced customer service, improve decision-making and increase the value of the business. Examples include IoT in components of machines, for example the jet engine of an airplane or the drill of an oil rig. Gartner reports that by 2020, there will be about 26 billion connected devices, far exceeding the growth of any other connected devices such as smartphones, tablets and PCs (7.3 billion units).

Why is it important?

There are already more connected things than people in the world. Gartner estimates that around 8.4 billion IoT devices were in use in 2017, up 31 percent from 2016. Total spending on IoT endpoints and services will reach almost $2tn in 2017, with two-thirds of those devices found in China, North America and Western Europe.

Of the 8.4 billion IoT devices, more than half will be consumer products like smart TVs or speakers. The most-used enterprise IoT devices will be smart electric meters and commercial security cameras, according to Gartner. According to analyst IDC, hardware will be the largest technology category in 2018 in modules and sensors, with some spending on infrastructure and security. Services will be the second largest technology category, followed by software and connectivity.

But why would we want so many connected devices talking to each other? There are many examples for how this might look and the potential value as a result. For eg, on your way to a meeting, your car accesses your calendar and already knows the best route to take. If the traffic is heavy, your car might send a text to the other party notifying them that you will be late. Or your alarm clock wakes you at 6 a.m. and notifies your coffee maker to start brewing coffee.

IoT is already growing to be one of the most important technologies of everyday life, and it will continue to pick up steam as more businesses realize the potential of connected devices to keep them competitive. IoT provides businesses with a real-time data, delivering insights into everything from the performance of machines to supply chain and logistics operations. IoT enables companies to automate processes, reduce labour costs, cut down waste, and improve service delivery; making it less expensive to manufacture and deliver goods while offering transparency into customer transactions. IoT touches every industry, including healthcare, finance, retail and manufacturing.

The applications of IoT is as far as we can imagine. Besides our everyday lives, in business, on a grander scale, IoT can affect our lives in the form of Smart Cities, as shown in the picture below.

It’s not difficult to see why IoT is such a hot topic. Conversations about the IoT are taking place more frequently all over the world. For now, the best thing to do is to educate ourselves about what IoT is, the potential effects on how we work and live, and how this will impact our lives.

While IoT opens the door to seemingly unlimited opportunities, it also poses many challenges. We will delve more into this in our next part of this series. 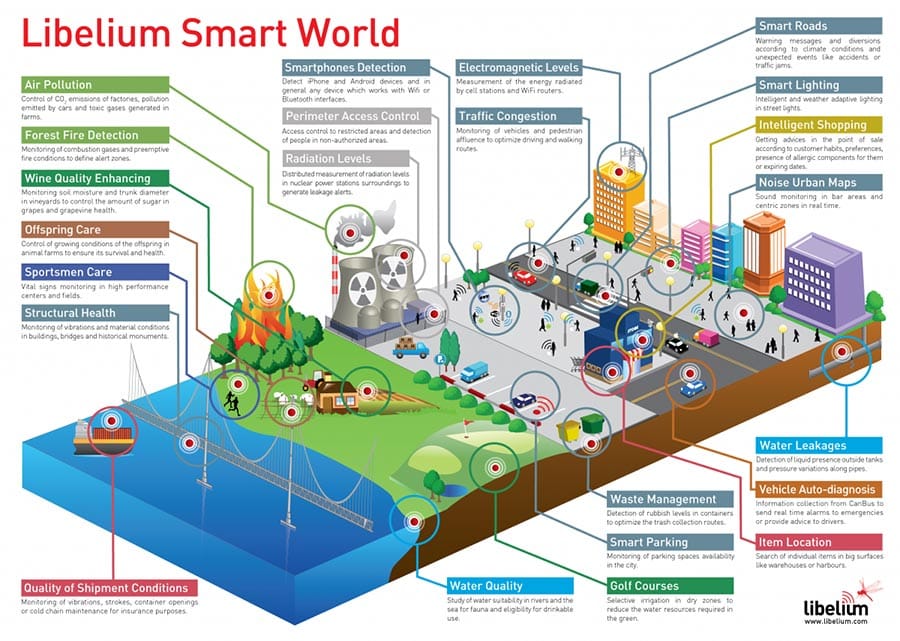